Nocturnal Redemption: In the Eye of the Beholder is Published 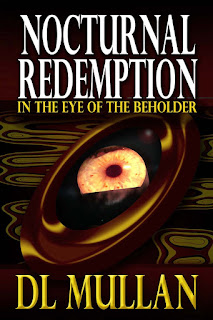 Star-crossed lovers? A Shakespearean play of Romeo and Juliet set in modern times with paranormal and supernatural beings. Vampires, werewolves, and gypsy witches come together in this book series of mystery, intrigue, and treachery.

Who will end up the victor?... Nocturnal Redemption: In the Eye of the Beholder:

"After The Great War, the Vampire Nation grew silent. Unable to produce children of their own because of a witch's curse, the vampires remained isolated to protect their numbers.

One vampire leader, Chloe deHiver, has decided to hunt down and kill all the descendant witches in order to end the curse. Unfortunately, the young woman, Ryan Blackburn, who is the last of the gypsy witches is also the only hope for the Vampire Nation to reclaim their progeny.

When Ryan is attacked by werewolves, she is rescued by the hidden Regent of the Vampire Nation, Jeremy Hampton. This event sets a domino effect in motion that Chloe could not foresee. The future of the vampires lies on a knife’s edge: matters of the heart.

Could the love that betrayed the gypsy witches into cursing the vampires three hundred years ago be the one thing to end their immortal suffering and bring peace between these two ancient factions?

Love is always In the Eye of the Beholder."