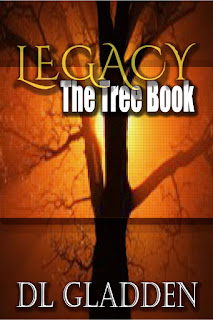 DL Gladden is the author of Legacy: The tree Book.

Summary of his novel from Amazon:

Long ago in the Andromeda galaxy, history was made as two intelligent species experience their first contact with alien life. The Primevals had long believed that they were the only ones to be found in the cosmos, while the Khoisans never truly had the chance to strike out and see for themselves. What followed afterwards was a series of events that would see the entirety of the Andromeda galaxy engulfed in the suffocating haze of Darkness.

Fueled by hatred the Khoisans turned on each other as madness relentlessly pushed their kin deeper and deeper into hiding. Fear and misery would drive them to look even further out for an escape, during this search for a safe haven is when Earth was found nestled on the edges of a neighboring galaxy. The mistakes of the past haunted the Khoisans concerns for the future. Many argued that they should not meddle in the affairs of the humans at all. Time was thought to be bountiful as the encroaching smoke that choked the Andromeda galaxy would one day spill over into this nearing neighboring one named the Milky Way by its natives.

As some of the last rays of hope died away in Andromeda, attention was averted back to Earth and the humans who lived there. Since the discovery of the humans, their potential to impede the insanity of the Darkness had long been an idea. No one wanted to force this on the inhabitants but now it had to be seized while there was still time.

How do you explain to mankind the dangers of an advancing empire of whom can travel among the stars, when humanity is still living in huts? The matter was settled with the decision of no contact but to alter the very DNA of the humans, gifting them with untold powers. Now it's just a matter of watching these humans grow into maturity as the madness carried on the back of Andromeda creeps ever closer. This choice was not made lightly as the Khoisans knew full well that this would change not only their course of history but also the humans as well. The brink of which the Khoisans had been pushed to afforded them no other way. The humans will now have to choose between becoming the champions of tomorrow or shackled to the Darkness, welcome to the universe of Legacy.